Tonight we played another session of Dialect by Kathryn Hymes and Hakan Seyalioglu using the “2081 Solar Slums” background. Our characters—Laila, an underground hacker known as the Vanisher; Chelle Rifts, the most strident anti-corporatist around who trains young outcasts on how to hack and stick it to the corporate overlords; Doc Hermes who helps all those without corporate-sponsorship with the hardships of our sun-baked Earth; and Jorday, an artist who constructs installations out of shadow and light—were outcasts from the corporate-sponsored bio-domes where the respectable cogs lived. We stayed in a slum known as Freedom Skies that was defined by three aspects: the blazing hot sun that could fry a human not wearing protective headgear or clothing, our hacking of the corporate systems and the hover car chop shop and demolition races that sustained our slum economy, and the constant struggle to reach past our biological limits without using body mods since that technology had been abandoned after driving the early adopters insane.

First we introduced a greeting “ent-dow” from “enter my shadow” that means “welcome”. The concept of worry, especially about death, developed from photophobia into “pho-pho”. Our currency is tied to our hover car economy and knows as sparks & scraps, like dollars & cents. And the cream that can protect and treat the dangers of the sun is in short supply but known as Burn Out. Later, we added “shi-shi” for shining shiro (white in Japanese) to mean a feeling of power and mastery, the opposite of pho-pho. Those who lost their minds by becoming cyborgs are known as “Rimzers” and the unbreakable promise we make to one another as free humans is being “bareborn” to each other. Toward the end of our story, before our slum was transformed by corporate raceways and racer sponsorships and the installation of portable domes to provide semi-permanent protection from the sun, we orchestrated a mass demonstration against the corps by hacking the casino and handing out shade sombreros, fedoras with telescoping brims to block out the sun, that led to “Fred-Z” or fedora frenzy that flashed a proverb that used to define Freedom Skies: “You can’t cover your passion with Burn Out”. By the end, our four characters mostly stayed in the underground, but the vast majority of our fellow free sky-ers went to live in the portable domes.

Finally got to play Pasión de las Pasiones! In episode 143 of this ongoing Telenovela, we got to explore the life surrounding an extravagant club in Miami. The club in question was known for its extravagant chocolate fountains and exotic animals petting zoo. It all started going downhill when Blanca, the clumsy employee forgot to lock up the tigers at the end of the shift. Her lover, Indigo, came to the club to help, but he was smitten by Marcela, the beauty of the club and got distracted with her. In the meantime, Valencia, the owner of the club was plotting with Blanca’s twin sister Bianca on how to expand the club’s burgeoning cocaine dealing business. While Valencia was trying to keep her club operating, and expanding her business, Indigo used his looks to seduce countless people at the club, much to the chagrin of Blanca who loved him. Trouble escalated when we learned that Marcela’s boyfriend, Federico, who happened to be Indigo’s son, starting working at the club…while also being an undercover informant for the police. 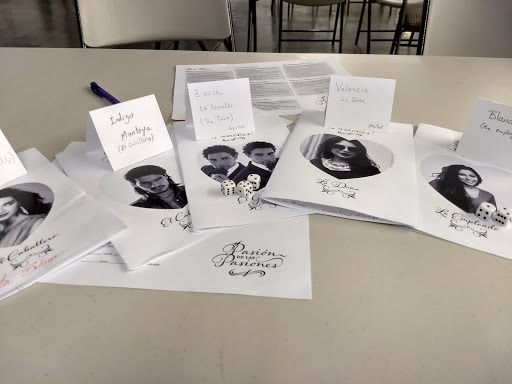 To ease the tension, we turned to Jackson Tegu’s Kaleidoscope hack of Microscope to create a German action film about teenage angst. Our friend pitched it to us as “like Die Hard with haute couture added but directed by John Hughes”.

First we explored the story of Clarissa Cabbage, a fourteen year-old Asian-German about to celebrate her quinceañera. She started as part of the tailoring training montage and the party dress montage but the bulk of her story was revealed during the extended quinceañera party itself, during which a police car careered through the backyard fence, the party court whipped out automatic weapons from under their dresses and engaged the cops, Jason Statham showed up on a moped to help Clarissa escape, and it was revealed that he was her long-lost twin from the future.

Next we learned more about this twin, Jack Froot, who had been sent back in time at the age of five in order to be the right age to help her at her quinceañera. He reveals his backstory though monologue and flashbacks, how he had sent himself back in time and was the tailoring master who was training Clarissa earlier in the film. The two of them sat in the clinic for what seemed like hours waiting for the DNA tests to come back confirming that “now they are family,” and Statham attempts to sell being emotionally touched by the reunion discredits the movies attempt at ending with an uplifting life lesson. But who is that mysterious man in the fedora watching them in those montages?

Turns out he is the films villain, Hans Selengretl. At first it seemed like he was a hat fiend determined to make the world shabby by putting fedoras on everyone, even if they are already wearing other headgear! But slowly it became clear that Hans was also a time traveller who came to the past to enact revenge against Jack for the death of his beloved Clarissa. He and Jack exchange banter over the radio while Jack was waiting on the DNA results, he shows up at the party and fights alongside the police, and he faces Jack in a showdown near the end of the film.

Strangely, the fourth character, Sew Tantie, was completely overshadowed despite being played by Meryl Streep. Sew died mowing down Hans’s horde of minions with her sewing machine gun to clear a path for Jack to take down Hans in that epic finale.

The film was called “A Stitch in Time” in the original German but is known more popularly as “Fifteen Timelines” or “Tailor Krauts” by the fans.

This week we played Ten Candles by Stephen Dewey. After the sky went dark, and They came, four volunteers were left trying to make scientific sense of what had happened. A biophysicist, a biomedical researcher, an electrical engineer, and an anethesiologist, they spent a few days in a basement laboratory, but soon realized that their only hope was to make it to the observatory up on the hill. On the way, they picked up another survivor, a young girl who had figured out that fire keeps Them away. At the observatory, our protagonists tried to get the power on so they could observe the sky, and then tried to take samples of the goo They left behind, but all attempts at science were thwarted by corrosive goo. After being joined by an observatory staff member, finding one of Their victims in a cocoon, and losing their truck to one of Them, the band of survivors decided to abandon the observatory and head back towards town — the town might be on fire, but at least that would keep Them away. Unfortunately, the drive down the hill claimed the lives of three members of the group. When the remaining survivors made it into town, they discovered that the observatory worker was actually one of Them in disguise, and the last of our heroes quickly succumbed to the goo.

We played Until We Sink by Magnus Jakobsson and discovered a mysterious, haunting island sinking into the Pacific. Just before we arrived, Dave the fisherman died on the rocks for no apparent reason. The night after our arrival, Velma the bush pilot sees a figure on the rocks in a storm, but no one else witnesses it. Luke an alcoholic writer hiding on the island is secretly trying to determine what happened to Dave, but Lily the owner of the hotel keeps trying to put him off the scent. But Luke and Lucy, a stoner backpacker whose washed up here, go up into the cave that Lily keeps warning them away from and discovers a pentagram and various occult paraphernalia. A message carved onto the trees suggests Lily knows more than she’s letting on. As the island finally sinks beneath the waves and we’re marooned on the motorless boat waiting for rescue, our secrets are revealed. Lily explains that she had summoned a demon to save her island but it had failed her and now might be loosed upon the world.

Afterward, we played a quick session of Cheat Your Own Adventure by Shane McLean in an undersea modern city to tell the story of a young merwoman in the city, an associate attorney starting a new job. If she failed, she was fired. She kept getting fired for trying to do the right thing and kept making it through when she showed the most brazen chutzpah. It was a low-key story unlike the action-oriented CYOA that we’ve played in the past and a lot of fun. We even got in a test round of Ghost Court by Jason Morningstar which was fun and will likely make it to the table again very soon.