Tonight we played Companion’s Tale by Laura Simpson to create a world with magic and heroes and ancient gods and traditions, and to tell the tale of how the last hero brought about the end of this Age and the beginning of a new one.

Our world centers on an ancient crater where the old gods crashed to Earth, leaving their artifacts scattered about our lands. We are a people who know we cannot rely upon our fallen gods and so must be self-reliant and industrious to achieve prosperity. In fact, it is taboo for us to return to the crater to collect the totems of the gods. The priests of the old gods wield magic but one can only advance by defeating another priest in personal combat. Recently, the traditional bonds of respect and fealty in our society have begun to unravel as the young have begun to shortchange their elders when making their offerings of wealth. It is this world from which the last Hero emerges.

In Act I, we learn about the Iron Queen who became an herbal healer after a head injury and whose herbs eventually turn sour and sickening, of the priest who began levitating everywhere after losing use of his legs in a fight with a challenger, of the elder who broke the taboo and mined the crater only to emerge with his eyes sealed and a handful of glowing gems that people still search for, and of the family whose first born lost the ability to work and responded by forming a woodworking manufactory known as the Plankers. We also meet the Oracle who seeks the Hero’s aid after having a vision of a remnant of an old god trapped in a suit of armor being held captive by a distant king. The Hero is reluctant to help until the Oracle promises to pay him with an ancient and magical silver coin, but the Oracle doesn’t have the coin and the Hero still awaits payment. Another companion is the First Born who the Hero sires in contravention of a prophecy and who is given into the combative care of the priests in fulfillment of an oath. Our third companion is the Rival who is driven out after the Hero falsely accuses her of endangering children during a flood in which they both try to rescue a drowning child. A festival has arisen in honor of the purging of the Rival at the site of the flood even though the rescued child is struck mute in response. Finally, we meet the Monster, a traveler who witnessed a ritual being conducted by priests as they try to sacrifice a falcon, the most human-like of animals, to balance out the birth and counteract the prophecy’s curse with their magic. During the ceremony, the spirit of the falcon enters the traveler and ever since he has transformed into a falcon and finds it ever harder to return to human form.

In Act 2, we hear of the time of the warlords, when each priest led an army that fought for control leading us to the ritual of personal combat to allow for peace in our society, and of the elder who created and exploited a wood scarcity, and of the dire shortage of falcons that causes a crisis in our sacrificial rituals due to the twin calamities of the distant king creating a massive falcon aviary and our free falcons becoming stricken with plague from the bad herbs. We also meet the Rescued, who had been a knight of that distant king but was sentenced to death for the treason of loving a foreigner, the Rival. When the Hero pulls him from the gallows, the Rescued agrees to return and protect the Hero’s people from Northern invaders if the Hero will finally reveal the truth about the flood and the Rival. The next companion is the Childhood Friend who tells us of how an encounter with a shining sword in the woods changed the Hero from a kind boy into the mean-spirited and covetous man we know today. The Outsider tells of the great battle against the Northern invaders during which the Rescued created the opening for the Hero to turn back the foreign tide. Finally, the Spy reveals to us his mission from the priests to follow the Hero and prepare him to pay the price for having broken the magical cycles when he defied the prophecy.

The world changes irrevocably in Act 3, when we learn that the armor-clad remnant of the old god was lost by the Hero when an earthquake swallowed it on the way back from the distant kingdom, that an ancient nursery rhyme about the floating priest is missing a line that may have recently been rediscovered, that Northern defectors still walk our lands, and that the ongoing search for the sightless one’s gems is futile. The Oracle tells us of the vision that the priest’s decisions are guided not by our welfare but by an effort to prepare us for the coming doom and we learn that the teens have been hoarding money in preparation for an overthrow of the priests. The First-Born decides they can stand it no longer and walks into the crater with a sick falcon, while the priests prepare for one final sacrifice. The Rival tells us of how she tries and fails to stop the Hero from chasing the First Born into the crater, while the Plankers ally themselves with the Teens and the Healers follow the Plankers’ lead. The Monster can no longer take human form but finds the lost silver coin and drops it into the crater for the Hero, as predicted in the lost line of the ancient rhyme.

In the climax, the priests arrive at the crater and sacrifice the Spy to stave off the doom, but their efforts fail. Once the Hero brings his shining sword and the silver coin to the center of the crater, the combination of ancient artifacts from the crash cause an implosion that buries the priests, the Hero, and the last remnants of magic and the old gods far below the surface. Only the Monster transformed forever into a Falcon is left as the final witness of magic and the ancient ways. Left behind is a whole new world without magic or heroes, a world of money, consumption, and industry as envisioned and made reality by the Plankers and the Teens, our merchants and monied interests.

Tonight we played Companions’ Tale by Laura Simpson for the third time. The game seems designed to produce a rich world with a built-in legend, history, and culture more than a story or characters. If so, it does a great job of it. Our world was centered around a volcano, a volcanic island surrounded by a forest haunted by the Adeeba, which we appease through annual rites and ward off through songs of mockery. People who brave the Adeeba and the forests to reach the mouth of the fire mountain are blessed with magic, and children are sometimes lost and returned as changelings.

Our history includes the stories of the seeker who learned the names of all the stars and the gift of foresight, which had lead to a golden era of prosperity. And the young daughter of a chief who didn’t spend the traditional night alone in the forest before marrying and remained childish all her life with tragic consequences. And in the fable of Monkey and Snake who frolicked together in the forests, they eventually stray too close to the mountain, so Monkey must sacrifice himself to save his friend. But the events that dominate our story and the life of the Hero, is the arrival of the Big-hatted interlopers in their tall ships who carry and covet the metal that resists the mountain’s fire, and the war between our people and theirs for control of the island and the metallic ore.

We six companions knew the Hero from childhood, when they promised to protect their friend, and when they barely escaped before a village was destroyed in an eruption. We confronted the Hero on the edges of the forest and between the villages. We were saved and rescued by the Hero when we had lost everything, restored to ourselves and solicited for guidance. We fought with the Hero in the war with the big-hats and witnessed the final moments before they walked away when the Hero ended the war by bringing forth a special changeling child from the wood. 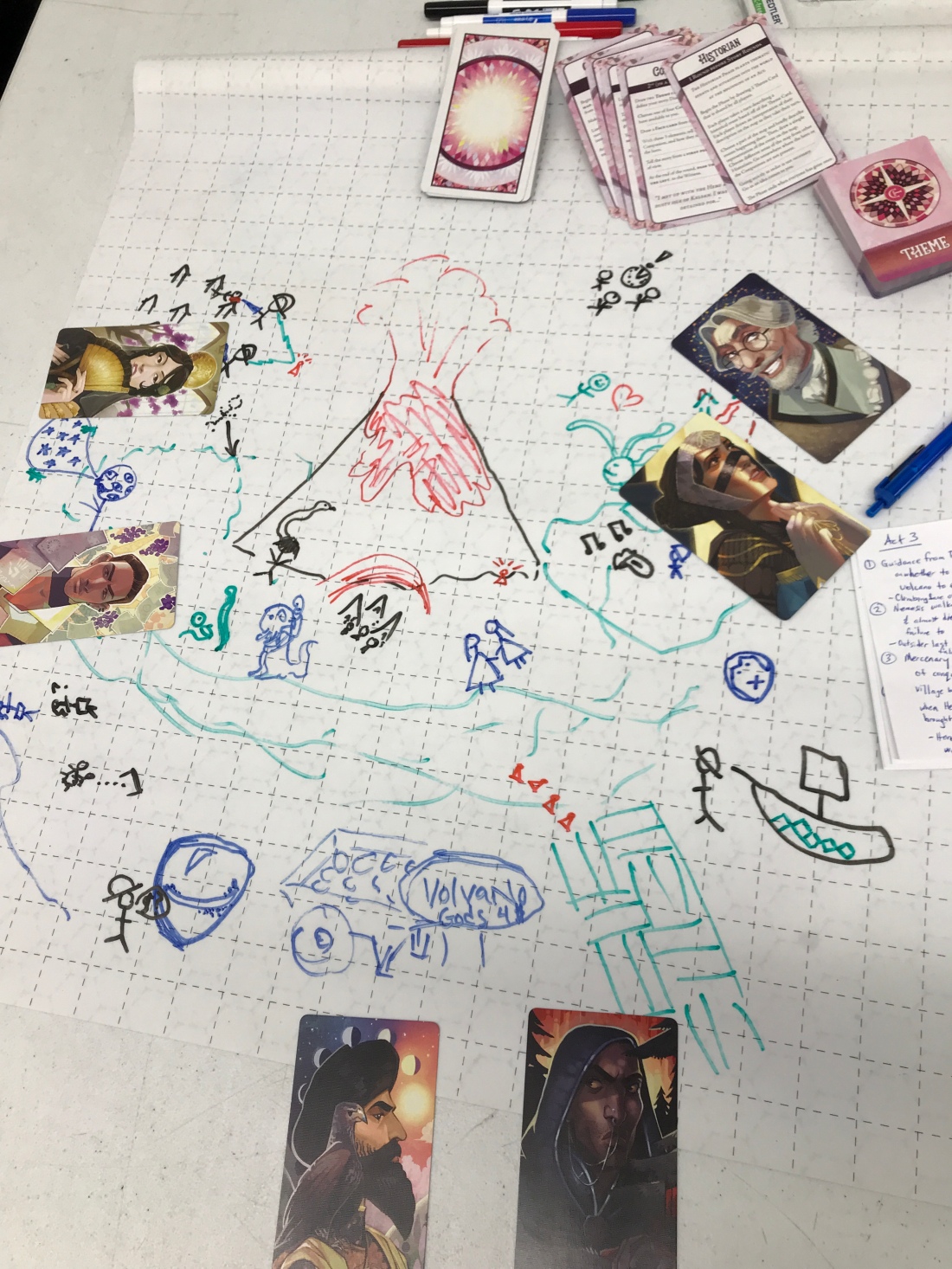 We played Companion’s Tale by Laura Simpson this week, and created a world through which a mysterious Hero strode, leaving many questions behind. The land and story revolve around the Inner Sea, fluid as our society’s connections. Our people do not steal while opening our homes to each other; we have no locks nor thieves, but magical technology from the Magus Guild now suffuses our lives. In Act 1, we meet a maiden Rescued from a tower by the Hero against her will, a Mercenary who wields magic and daggers by the Hero’s side, and the Hero’s Nemesis who is determined to restore the Reckoner’s Guild. In Act 2, these three are joined by a Spy who the Hero sacrifices to protect, inspiring a change in loyalty; the Hero’s Childhood Friend, worried by the change she sees in the Hero; and a young villager who believes the Hero to be the prophesied savior and so becomes their Protegé. Our story concludes when the Hero leads the people to overthrow the Magi, which return our lands to tribal warfare and petty conflicts. With the loss of the Magi, the last of the ancient guilds are gone.The open doors between people close, and the companions, whether they carry on or flee, remain in the Hero’s shadow. 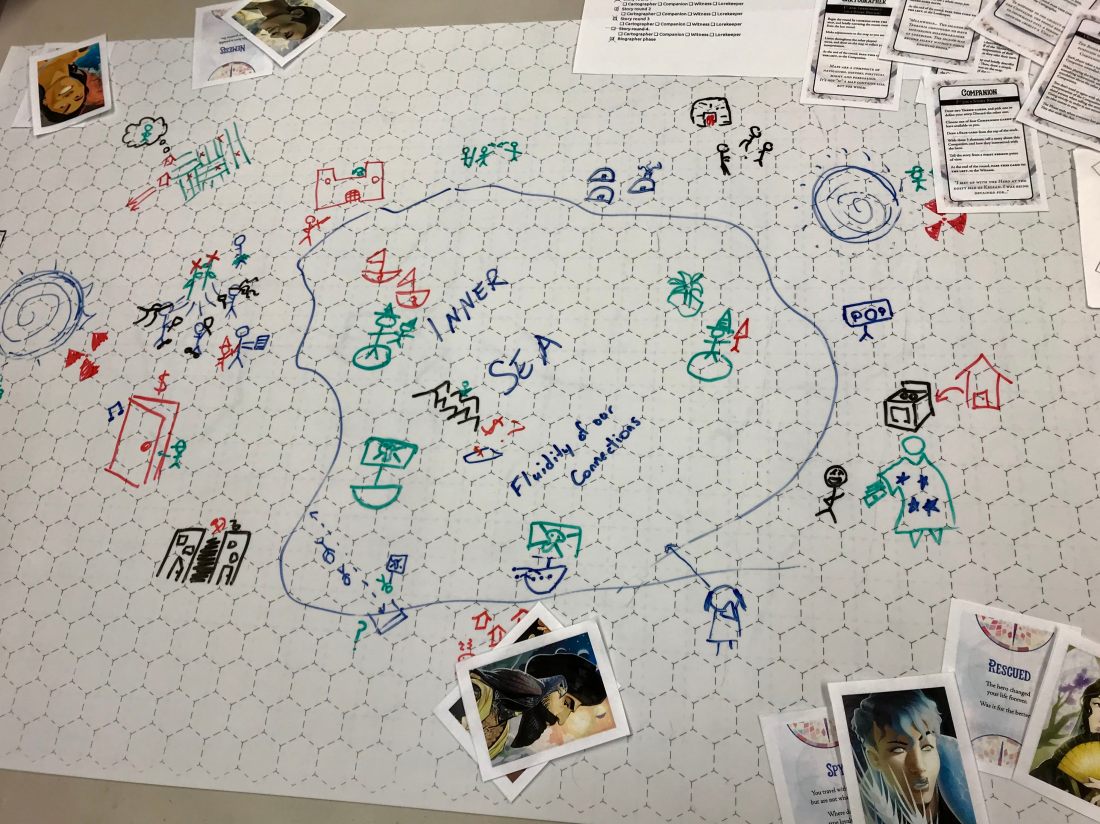 Tonight we played Companions’ Tale by Laura Simpson. We told a tale of the conflict-filled land of Orselia, where the threat of dragon invasion hangs in the air and aspiring magicians seek enlightenment through transformation into undead mummies. Through the eyes of his companions, we learned of a mysterious Hero who would wield his magical power to defend us. But who is the Hero, really? It depends whether you’re talking to the entrepreneurial Mentor, the devoted Protege, the tale-spinning Bard, or the island-defending Outsider.