Tonight’s story, courtesy of Archipelago by Matthijs Holter, was of a Martian Colony, newly terraformed to allow one to breathe on the surface. It was a time of political agitation as some had begun to wonder why we needed to remain under Earth’s yoke and others preferred to remain close and at peace with Earth. Our cast included the prison warden and master of the underworld, Astrid; potato magnate Ken Bekerson; spaceport and trade official Quinn Payson; agriculture scientist and Martian patriot, Stace Marchon; shrinekeeper aspiring author Kersten; Senator Kent Carmichael, dedicated to maintaining peace; and Governor General Darcy Ycrod, dedicated to Governor General Darcy Ycrod.

The conflict centered around the Bekerson’s attempts to get rich by maintaining his monopoly, and the Governor General’s intention to increase the population of Mars through immigration, which required new businesses to create jobs. The independence movement kept growing in power and staged protests and overran festivals to make their voices heard. Amidst the chaos, Senator Carmichael sought the evidence to unseat the Governor General. We left the story unresolved at night’s end. 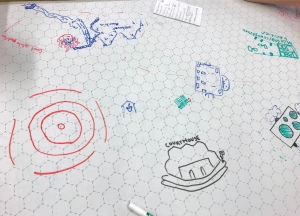